'It's not about the bike' 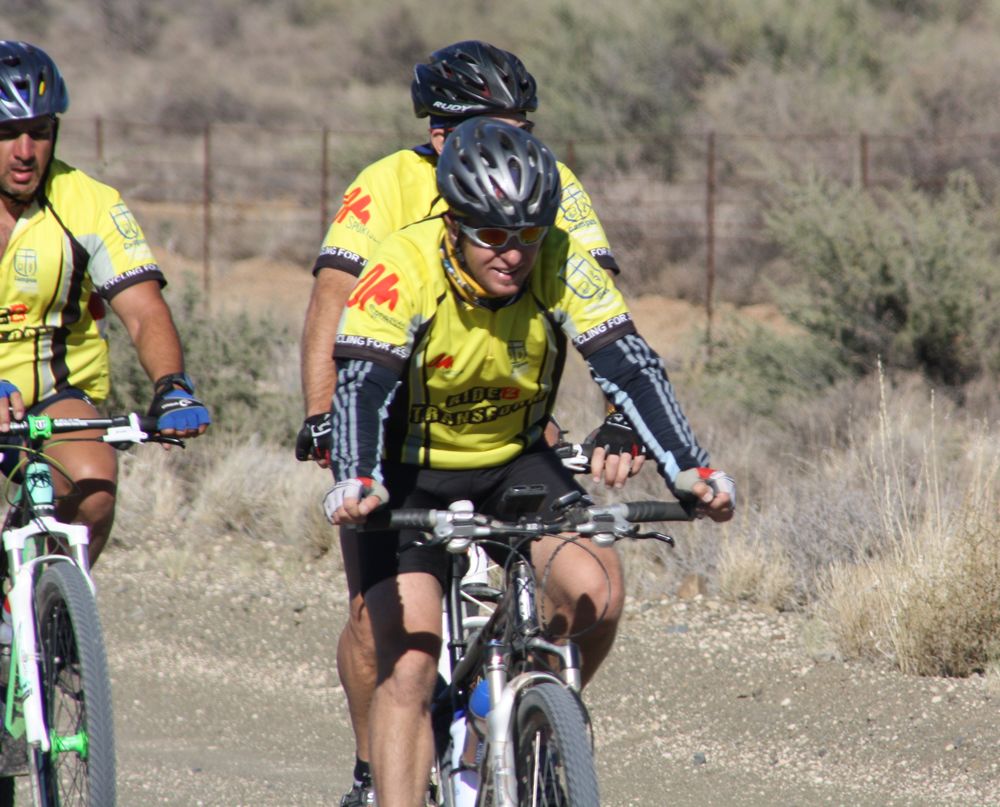 As a leader in OM’s sports ministry, Chris (South Africa) is no stranger to seeing landscapes fly past on two wheels. “I’ve cycled everywhere,” he said. South Africa, Wales and Malawi are just some of the places where he’s participated in organised tours. His parents – the first to show him God’s love – introduced him to cycling and sport as a child, preparing him for an active life following Jesus.

Thinking back on his cycling tours, Chris has clearly seen God at work, both in the lives of those he cycled with and those he encountered along the way. Through one partnership, the Bible was translated into the language of a people group who’d previously had no access to God’s Word. When Chris’ team cycled through that area, they gave people the Bible, in audio format, in their own language. “That’s where prayer and the least reached got connected, and that for me was absolutely the gold side of it,” Chris said.

For his most recent physical challenge, Chris joined a team of 14 cyclists 12-14 June 2020, to ride 1,000 km (621.3 miles) across Germany, raising funds and inspiring prayer for people around the world who have been impacted by the new coronavirus. While the €100,000 (approximately $113,000 USD) worth of donations brought in by the ride will undoubtably bless the projects and people who receive the gifts, for Chris, the unseen effects of 72 hours of continuous prayer matter more.

“The purpose was to start a movement of prayer, to create momentum for others to follow,” Chris explained. “My part in this Coronaride sometimes feels small, but I believe together we really got something moving. We initiated prayer on and off the bikes, and we have seen loads of people partake.”

As a national lockdown slowed down life in Germany, where he lives, “I deliberately slowed down as well,” he said. “I felt the urge from the Lord that we need to slow down and absolutely watch what He’s doing at the moment.” Chris took extended walks alone, without technology, listening to God and spending time in His presence.

Shortly after becoming a believer, Chris knew God’s plan for his life: making disciples. “I also knew it would mean listening closely to His guidance,” he explained. Throughout his life, listening to the Lord has often meant pioneering new sports ministries — and then passing them on when God showed him the next step.

So far, he’s moved his family four times, leaving extended family, friends and familiar environments behind to pursue God’s plans. “I’m grateful for my brave wife and flexible children. I’m most grateful, however, for the Lord’s constant leading,” Chris affirmed. “He truly has been the lamp to our feet and the light to our path, whispering into our hearts: ‘Follow Me.’”

Ahead of the Coronaride, Chris prepared a 12-week training plan and asked a friend in South Africa to help coach him. Despite his preparation and training programme, his specialised road bike began giving him trouble. “I went out several days with different training partners, and the gears kept slipping. Apart from that problem we kept on replacing different parts, and I kept falling back on my mountain bike during interval trainings,” Chris recalled. “I made sure that I kept eating the right food, focussed on good nutrition and did a lot of exercises to strengthen my core.”

In the end, Chris decided to ride his mountain bike, rather than the road bike, during the Coronaride. The first day started well. “The road bikes obviously had a little bit advantage as they are faster on the flats; however, I made up for it, staying in the group,” he described. “As the day drew to a close, my legs started hurting, and especially my knee was in pain. I kept in pace behind the road bikes, which was hard work and extra exhausting, but the team's encouragement and support motivated me to keep going.”

Eventually, Chris began to lag behind and knew he might not complete the day. “At the 300 km mark, I stopped with a sharp pain in my knee. I was in excruciating pain and forced to stop,” he shared. Chris called his wife and “after some encouraging words, I got back on my bike in pain and managed to complete the extra seven km to our waiting support vehicle. I felt I had failed and was so disappointed in myself.”

The other cyclists finished the day’s route while Chris rested his legs and spent the remainder of the day praying, as he had intended to do on the bike. Later, checking his activity monitor, Chris discovered he had ridden 307 km in 12 hours and 49 minutes on a mountain bike – a personal and perhaps a world record*. “Maybe I failed to complete the 1,000 km, but I believe I did my part,” he said.

Chris only cycled on the first day of the Coronaride, but he travelled with the team in the support vehicle the whole weekend, encouraging the other riders and actively participating in an international WhatsApp prayer group with around 120 people.

“It was not about the bike, more about the prayer we mobilised,” he emphasised. The feedback in that regard has been encouraging. In addition to individuals volunteering for 144 prayer slots that spanned time zones to cover the duration of the Coronaride, “people were woken up in the middle of the night [to pray], people who weren’t in the group prayed for us because they felt something going on,” Chris explained. “That is… something to celebrate.”

One friend prayed for an hour and a half every day in Zambia; a team of seven in Central Asia also prayed throughout the event. OM’s international director, Lawrence Tong, phoned Chris to tell him he had prayed for a country in North Africa with very few known Jesus followers. “I think there’s so much stuff still that we will see from that [prayer],” Chris said. “I would love to hear what are some of the miracles that have happened, big or small, on the other side of the prayers.”

Personally, Chris experienced God’s guidance during the Coronaride. “I do feel that there were times that I was operating out of my own strength,” he admitted. On the first day, when Chris struggled, cycling into the wind, he heard God’s assurance: “Trust Me.” During what he described as a spiritual storm on the second day, Chris leaned on friends, who phoned him and prayed. One friend also gave him a Scripture verse. “It was like a godsend,” Chris shared.

At the end of the weekend, the other cyclists completed the 1,000 km challenge, and Chris invited those who had participated in prayer to join another group to continue the spiritual momentum. “Together we are stronger; together we can do so much more. Together we succeeded! Surely [that is] something to celebrate,” he said.

*The furthest recorded distance ridden on a mountain bike was 577.78 km completed in 24 hours, according to Guinness World Records. In 12 hours, Chris cycled 307 km, more than half of the record’s distance.