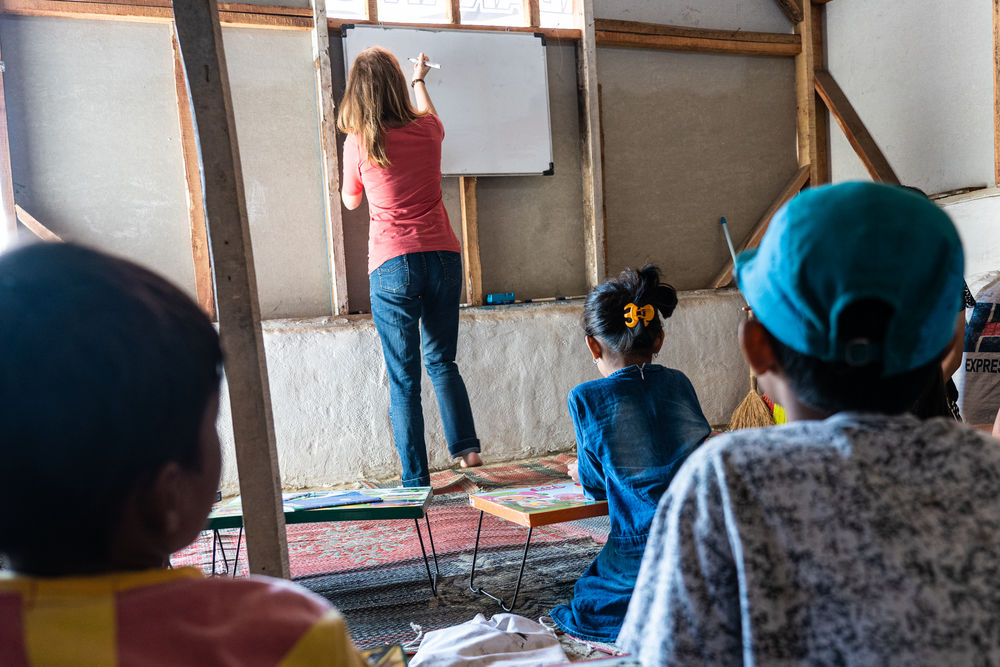 “Education alone doesn’t fix everything, but it gives a way that [students] can be encouraged; that they see that they can do something. When they succeed at doing something like spelling the word right and forming a full sentence – that’s good for their self-esteem,” shares Angie*, a petite blonde from Europe, currently serving in South-East Asia. “I really hope that they can know that no matter what they learn, or what kind of situation they find themselves in, they are capable of doing things by themselves.”

In a one-roomed shanty, built out of thin bamboo with a corrugated steel roof, Angie’s 15 students hover over their pop-up tables, sitting on a hard-trampled mud floor and copy the day’s lesson into their notebooks. These English classes, taught in various poorer parts of the city, are a regular opportunity for the children to develop their English proficiency, grow in self-esteem, and learn morals and values for day-to-day interactions with their family and communities.

Many of the students have learnt bad habits such as putting others down or calling someone a ‘dog’, which in their Muslim culture is calling someone ‘the worst of the worst’. Angie and the other teachers model a different way of life – one that includes encouraging others, uplifting them and offering sincere apologies. “I really hope [our students] will learn how to love each other with words and also with actions,” Angie explains.

“We try to wait for everybody, which is sometimes difficult because of course everyone has different levels,” Angie shares. “But taking the time and going at a student’s individual pace makes a difference.” She tells about one student who struggles to write and is often the last to finish the assignments, and how she sits with him and waits while he writes everything down. Later, when he finishes, he can smile, too, and say: “I did it.” Her patience with him and celebration of his successes encourages him to keep working hard and to know that he is valuable.

For Angie, part of her motivation to demonstrate God’s love to these children and their families in a foreign country stems from her own experiences as a child. “[My father] was really not a good guy,” she admits. “He loved me in a way, but as a child you definitely feel when something is wrong with an adult.” She learnt at a very young age, that “not everyone experiences love from his or her biological father”. Beginning her life with this emotional vacancy and seeing her father imprisoned for his crimes left a mark on her.

Then when Angie was only five years old, her father was released from prison and she clearly remembers that he called her by name, gave her a hug and told her he loved her. Her father was a changed man. A prison missionary had spent time talking with her father and answering questions about a God who had seemed so distant. The missionary’s faithful demonstration that no one was forgotten by God brought Angie’s father to the point where he wanted to know Jesus. Even though Angie was still young, she felt the change in her father and knew for herself that “there had to be a God. There had to be someone who was loving my father and who was willing to forgive my father, too.”

Later, as a teen, Angie remembers viewing the movie ‘Blood Diamond’, and when she saw those children who had nobody, she prayed out loud: “Who’s going there, Lord?” While there was no immediate reply, Angie’s heart for those in poverty and without love continued to grow. “God takes our prayers seriously,” she says with a smile. It took several more steps, of trying short-term missions opportunities and then serving in her home country with OM before God led Angie to where she is currently teaching. But the poverty she has seen and heard about, as well as the lack of access that so many have to hearing about Jesus, continues to motivate Angie to be involved in cross-cultural missions.

The communities where Angie and others teach want better for their children; the parents recognise that the once-a-week English lessons provided in public elementary schools are not enough, but they can’t afford private tutoring. And so, the English classes are an opportunity for these children to rise above the poverty that surrounds them.

The teachers have built trust not only with their students but also with the families in the communities. They are invited into homes, and, especially when a student is sick or absent, they visit these homes to check on the child. This personal connection has provided opportunities to pray for the children or their families and to engage in conversations about Isa al Masih, Jesus, who loves and knows all.

“The meaning of grace is a good place to start a conversation with people here,” Angie has found. “When people get to know [Jesus] they realise that they may not be in control of all of their circumstances, but God is, and that can lift someone’s burden and change their life.”