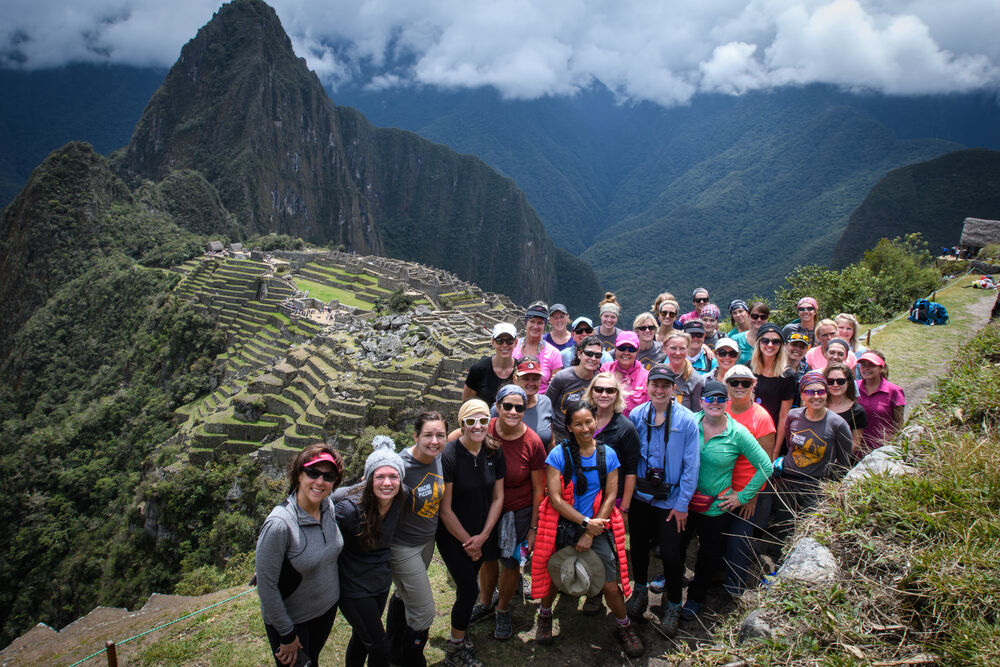 “For a girl that used to wear high heels and never camped, I find myself very curious and almost laughing at the journey God has me on,” said Tracy Daugherty, director of the Freedom Challenge.

That journey most recently included fording a raging mountain river, climbing some 12,000 steep, narrow steps (according to rumour; no one actually counted the stairs) and summiting the 4,600 m (15,090 ft.) Salkanty Pass during a five-day trek to Machu Picchu, Peru.

Forty women participated in the Salkanty Trek; fifty per cent were first-time climbers. The multi-generational, international group raised about $250,000 USD for the Freedom Challenge, a ministry of OM, to fund projects helping oppressed and enslaved women and children around the world. “These women—fierce, godly, unified, like-minded women—had Jesus on their minds. There was so much spiritual breakthrough on those mountains,” Tracy described.

Alex Arpag, an OM videographer who accompanied the women on the trek, agreed: “Every time they had the opportunity to be scared, they were brave. Every opportunity they had to complain, they praised. Every mountain they faced, they prayed for the victims they were raising money for. …I saw God in every one of those women.”

Some of the climbers, who came from five different countries, regularly interacted with women who had been trafficked and exploited. Others first realised human trafficking was a modern problem when they signed up for the Freedom Challenge.

Irina Lambru (Moldova), works with a non-profit organisation called Beginning of Life, which aims to restore women who suffer from different kinds of sexual exploitation or are impacted by social injustice. “I am a part of this climb because I want my people, our people from Moldova, to know that the problem and the issue of trafficking and exploitation still exists. … And I want those people who don’t have a voice, that their voices will be heard at the top of the mountain.”

Denise Heppner (Canada) got involved with organising the Freedom Challenge in Canada after a missionary shared about the initiative in her church. “I’m just a mom. What can I do?” she wondered at the time.

Nonetheless, Denise said God laid it on her heart to do something. “Once you open that door, you can’t close it. When you’ve seen what’s on the other side, you can’t go back,” she explained. “God has changed my heart so much and opened my eyes to things that are so incredible.”

Since her first climb with the Freedom Challenge to Everest Base Camp in Nepal, Denise has actively shared information about human trafficking with churches in her neighbourhood and beyond. Taking part in the Machu Picchu climb, however, was more personal. “This one’s for me,” she stated.

“I have a lot of different things going on in my life: a lot of challenges, a lot of changes, a lot of scary unknowns, and I really have a heart for these projects and these women, but I’ve also seen what [the Freedom Challenge] does in women’s lives. It’s really empowering. God meets you on the mountain, He gives you messages and beautiful images and stories just for you. And these women come out of it empowered and changed.”

Through money raised by participants, the Freedom Challenge supports projects around the world geared at rescue and restoration of women who have been trafficked as well as prevention for those who are at risk.

Nicole James is a world traveller and writer for OM International. She’s passionate about partnering with fields to communicate the ways God is working across the globe.