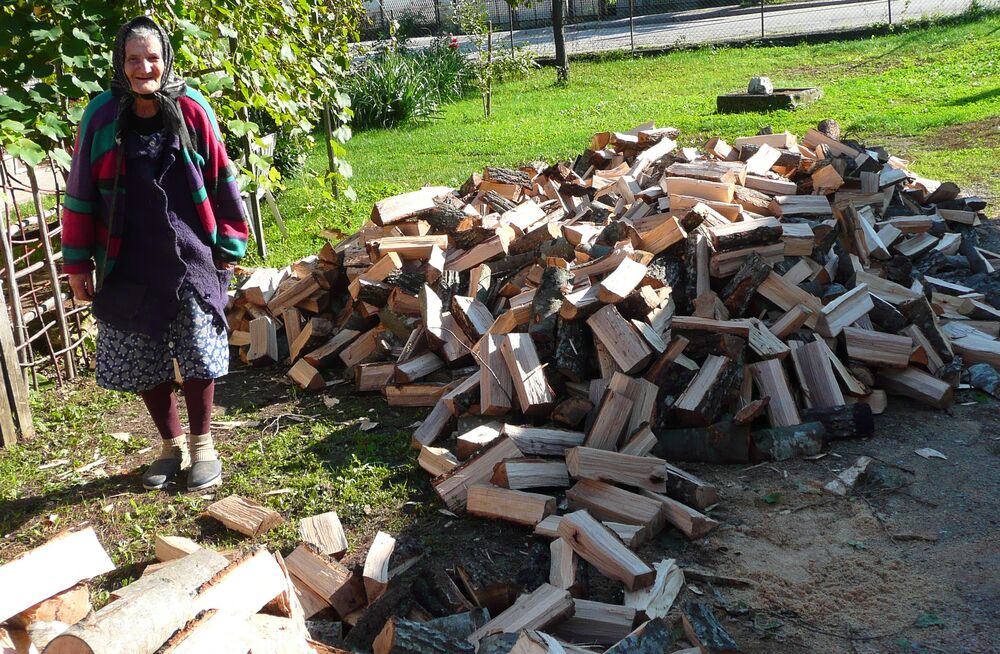 Over the years, God used OM Bosnia’s firewood project tremendously to bring hope to the hopeless, warmth to the freezing and food to the hungry. For the first time since 1999, there will be no wood provision this winter.

It was December 1999 and the OM Bosnia team had just finished their first ever firewood project in Bihać. They had money for 12 families to receive three cubic meters of un-chopped wood, and the Center of the Social Welfare made a list of the neediest households. The team found a trustworthy wood company, the director picked up the list, started the deliveries... and finished it all within a week.

In 2000, the project grew to five cubic meters of un-chopped wood for 45 families. Soon after the wood deliveries finished, OM Bosnia also received its first truckload of humanitarian aid: furniture, hygienic items, food and clothes. That opened a door for visiting those receiving firewood: the team could bless them with things from the warehouse as well as offer Christian literature and prayer. Many of the recipients were moved to tears. How did these total strangers know about their cold house? Who would give them firewood for free? If it really was ‘a gift from God’, like those people said, did it mean that God cared for each of them?

By 2001, the donations had grown to helping 60 families. Project coordinator Caroline visited each household, assessed their needs and brought additional items from the warehouse. It was also the first time that the project included a food package for each home. Yet the most amazing thing about that year was the “wood truck.” One village man came every day with his horse and wagon to sell firewood in the town. God laid it onto Caroline’s heart to help that man and he started the deliveries for the firewood project, one meter at a time. First it was going very slowly, but later he was able to loan a truck from a friend and it sped up the process.

In September 2002, Caroline passed the project into the hands of her teammate Jael. By that time the size of the project had grown to helping 75 families: each of them got five cubic meters chopped firewood and a standard food package. Different team members joined Jael at the house visits and God kept opening the doors for great opportunities to share about His love. That year, the Center of the Social Welfare had given the handicapped people the priority for receiving the wood. Each household had a family member with serious health problems, often with no regular income or any social support for medical needs.

Hope to the hopeless

Starting from 2003, the OM Bosnia team settled at 100 households per winter. That was all they could handle. Many households were in far-away villages on rough terrain and it took a lot of time to find them. The team van got stuck in mud and snow, rattled around holes and stones and almost slid off the cliff one time trying to turn around on a tiny mud road. The efforts were well worth it, though. God used this project tremendously to bring hope to the hopeless, warmth to the freezing and food to the hungry. Many of the current members of the local church had their first contact with the followers of Jesus through this project. It touched their hearts in such a deep way that they opened up for God and after some time committed their lives to follow Jesus too.

2009 marked another important beginning. For the first time, the OM Bosnia team was able to hand the project coordination over to a local brother. The project budget included a salary for Faruk*, so he was able to receive regular income for a few months. He was much better in it all than any of the foreign ladies from the OM team. He knew how to handle the wood companies, understood the mentality of the local people and was also able to explain the gospel to them in their cultural context. At the end of the project he also gathered the receivers to the local ministry centre for a special service. The believers would prepare a meal and introduce the church fellowship; after that Faruk taught them a simple message about the truths of God.

However, every year the firewood project brought up many conflicts. Some were not satisfied with the quality of wood, others blamed the forestry companies for stealing. One person was jealous of her neighbour, the other one tried to get most of her relatives on the list. If somebody had received wood for one winter, he automatically expected it as his right for the following season.  It also started causing a lot of tension in the local body of believers.

It seemed like everybody was always competing with the others about who was the neediest among them all. Jealousy, hard words, gossip and mistrust flared up at almost every gathering. At the end, it became impossible to continue: it seemed like whoever would receive wood, they would still be unsatisfied and everybody else would be angry.

By June 2015, the OM Bosnia team came to the conclusion that it was time to finish the firewood project. They would still run the project on the smaller scale for the upcoming winter (2015/2016), to honour the donators who had already sent money - but that would be the end of it.

By the end of the winter, 35 last families had received five cubic meters of chopped firewood and the food package. That marked the end of the project: there will be no more firewood distribution in Bihać during the winter 2016/2017.

However, soon after the finish of the last project, OM Bosnia received one more huge donation from OM Switzerland. Suddenly the team members remembered a heating-related big need: one of the local schools had asked for help for installing the central heating system in one of the village schools. The team contacted the sponsors- and received a green light from them. Two weeks later the work was finished. God had a special finish for the firewood project of OM Bosnia.

OM Bosnia team is thankful to God's faithfulness in providing more than they needed over all of these years through His faithful and generous people. Now He has already started providing jobs for local people, so that they can buy their own wood. He is also using other creative ways to provide for those that are still in need. His blessings never run out and His faithfulness never comes to an end.